Our Artist Spotlight series aims to create a space for discovery of new, budding global talent, while simultaneously offering you an exclusive glimpse into their creative process.

We’re absolutely thrilled to have the multi-talented theatremaker, Nia Farrell, be our next artist featured!

“I’m perpetually looking for Black space — one that doesn’t focus on the trauma of the Black existence and is instead filled with dreams, possibilities, and light. I want to share this search with others as a 'hey, you’re not alone', and 'here’s what I’ve figured out, what about you?,' and 'why don’t we all come together and we can make something special.'" - Nia Farrell

Despite being born in Thousand Oaks, California, a city nearly next door to Hollywood, Nia Farrellcan’t quite recall how her relationship with the theatre arts first began. She describes it almost romantically, not being able to articulate how she and theatre “found each other.”

However, now Nia, a soon-to-be graduate from NYU Tisch’s prestigious acting program, can’t recollect a time she wasn’t infatuated with the theatre.

Nia first delved into the arts as an actor, however, she quickly expanded her skills, as well as her own personal passions, to include directing, writing, and dramaturgy; she explains that she “love[s] to tell stories that navigate ideas of identity and belonging and are community-conscious driven.”

Strongly identifying as an Afrofuturist, Nia intends to bring these sociopolitical beliefs into her her upcoming theatrical performance, “Dreams In Black Major.” She encapsulates the piece as “an Afrofuturist theatrical event about celebrating Blackness and actualizing dreams as a individuals and a community.”

Nia also looks forward to developing her documentary, “How’s God? She’s Black”; the film’s premise dedicates itself to “finding, embracing, and honoring the god inside of oneself.”

YouthMundus was fortunate enough to delve deeply into Nia Farrell’s  creative process as an artist, as well as pick her brain about her origins as a musician, her own inspirations, and any advice she has for upcoming artists. 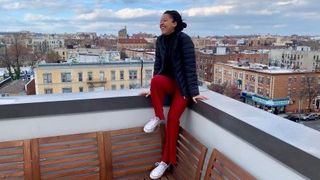 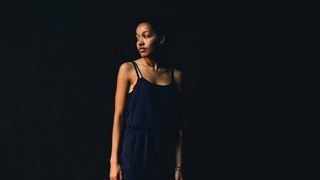 What inspires you and your creative process?

Where do I even start? Friends, family, romance, music artists that I know personally, Leonard Cohen, Oprah, Madonna, Mark Ronson, Cara DeLevingne, illness, injustice… there are so many sources of inspiration that I draw from, consciously and subconsciously. Overall, I think conflict that I have personally wrestled with has heavily inspired the content that I create, while artists that I have met or known personally have influenced the way that I approach and perceive my work.

Every artist, writer, and producer I have met and worked with has influenced my process to some degree, as well. I had the pleasure of opening for Mandy Harvey recently, for example, and found her story and music very inspirational. Although we have had different challenges, I definitely identified with her story and feel very blessed to have met and witnessed her performance. I found her approach to performance as a mode of encouraging others quite inspiring, and something I’d like to incorporate into future performances, rather than focusing primarily on storytelling as I’ve been taught due to my acting background.

What is the connection between your music and social justice? Why?

I have recently been seeking out more women to perform and collaborate with with the intention of promoting diversity within the music industry, since it is so heavily male-dominated. I also do not shy away from vulnerable topics, or advocating for causes I believe in in the music that I write.

For example, my song and music video, “Daddy’s Money”, aims to act as a satirical music piece to call attention to the exorbitant yet still rising costs of higher education and the issue that that causes in terms of perpetuating the cycle of poverty and reducing opportunities for talented, capable students.

I also write through a feminist lens, in songs such as “Rescue Me”, where I aim to inspire women to reject the social constructs designed to keep women inferior to men, and in “Music Heals the Soul”, where I promote sex-positive feminism. These are just some of the causes that I advocate for via the music that I create. I choose to write about such topics since I feel a responsibility to maximize my constitutional rights to the best of my ability in an effort to fight for equal opportunity.

What inspired you to pursue music? What were the challenges you overcame in this?

My high school talent crush and first (girl) kiss, Donna Missal, was definitely a huge source of inspiration for me. I had dabbled in songwriting after my first heartbreak when I was about 15 or 16, but didn’t have a songwriting community to turn to or even recognize that music was my true passion at the time.

Having attended high school for musical theatre, everyone I knew was too consumed with acting and showtunes to pay much attention to anything else. I remember being offended actually when a friend at lunch told me that she thought I was going to be a writer, since I used to come to lunch with new poem or song ideas, since I was so gung-ho about being an actor, singer, and dancer at the time.

After retreating back to the suburbs of New Jersey following my first semester at NYU due to the pressure of financing a university education on my own, let alone the most expensive institution in America, I joined a band as a backup singer to make a bit of money and escape my soul-sucking office job, and started coming across videos of Donna Missal performing her own music with a band as herself, instead of as a character on a stage as I’d seen her do countless times before in our school productions.

There was one song of hers specifically that spoke to me, “You Changed It All”, which I distinctly remember singing along to alone in my room for several hours after. It was very self-medicating song for me, and having learned later on that it had been written for a church, it made sense that singing it felt very much like a prayer, and fitting since that’s where I first gained positive recognition as a vocalist. This song and experience, in addition to watching Donna make the transition from musical theatre artist to music artist, inspired me to try writing my own songs, which proved beneficial to my recovery at the time.

Looking back, I think I had been using music as a self-medicating tool for many years, since I struggled with undiagnosed depression and anxiety for so long due to my ignorance of mental illness coinciding with a lack of proper attention and support. Writing and performing music at this time was less of a conscious choice than it was an essential ingredient to my survival, and remains less of an active choice than a calling. There have been an infinite amount of challenges that I have worked to overcome, and continue to work to overcome on a daily basis in pursuit of an artist career and lifestyle. Some have been unveiled and some will be unveiled in due time.

What’s been the most rewarding part of being an artist for you? Do you have any advice for future musicians?

I had someone come up to me at my last performance at City Winery and tell me how much my music meant to her, even though she had never heard of me or my music before that evening. That was really cool. Of course having a bit of recognition, applause, etc. is always rewarding, but to have such a powerful impact on someone who had never heard my music before - that was one of the most rewarding experiences I have had to date.

I also love the sense of control that creating art endows. I experience emotions at a greater intensity than most people, and the process of creating art about stressful life events helps me minimize the emotional impact of these events in my day-to-day life. In terms of advice, if this is a passion of yours and a journey that you aspire to pursue, my biggest piece of advice would be to start as soon as possible. Life moves fast, and it doesn’t slow down for anyone. My second piece of advice would be to work towards becoming as self-sufficient as possible. Knowledge is power, and you want to be in control of executing your own vision as much as you possibly can.

Thank you for your continuous support and love,